Cultivate'21 and the Hemp Conference at Cultivate 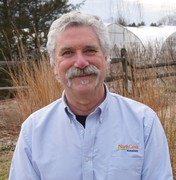 Steve graduated from the University of Delaware where he studied Plant Science and Education. He received a Bachelor of Science Degree in Plant Science in 1977. In 2015 Steve received a Certificate of Applied Horticultural Business Management from Texas A&M University. Prior to this, Steve attended and graduated from Girard College in Philadelphia.

Steve co-founded North Creek Nurseries in Landenberg, PA in 1988.  He currently acts in the capacity of President and CEO of this progressive propagation nursery that specializes in perennial, fern, vine, and ornamental grass plug production with an emphasis on Eastern regional native plants. In the early 2000’s North Creek developed and introduced Landscape Plugs™ to the horticulture industry.

In 2004 Steve co-created the American Beauties Native Plants® (AB) brand.  American Beauties Native Plants® are currently available at independent garden centers in Eastern, Southeastern, Midwestern and select Western States. When the brand was established, it partnered with the National Wildlife Foundation’s (NWF) wildlife habitat program. During the first ten years of the program AB donated over $275,000 to NWF.

Steve is a past president of the International Plant Propagator’s Society. He was awarded the honor of Society Fellow in 2005 and became the recipient of the society’s most prestigious, Award of Merit in 2012.  He currently serves as an Eastern Region delegate to the international board.  Steve is also very involved in his state’s green industry and served two years as President of the Delaware Nursery and Landscape Association.  As a member of the Governor’s Drought Advisory Board, Steve helped draft legislation to ease restrictions on Nurseries and Garden Centers in the state.  He also served on the Delaware Invasive Species Council, developing guidelines for the implementation of an invasive species policy in the state.

In 2010 Steve was the recipient of the “Farmer of the Year” Award for Chester County Pennsylvania which was awarded by the Chester County Commissioners and Agricultural Development Council. Steve was again honored in 2011 with the “Distinguished Alumni Award” from the University of Delaware’s College of Agriculture and Natural Resources. In 2015 he received the Award of Merit from Girard College.

North Creek Nurseries was voted Grower of the year by the Perennial Plant Association in 2015 and was awarded Operation of the Year in 2016 by Greenhouse Grower Magazine with special distinction for sustainable growing practices.

In 2020 The American Horticultural Society awarded Steve the Paul Ecke Jr. Commercial Award. This award is given to an individual or company whose commitment to the highest standards of excellence in the field of commercial horticulture contributes to the betterment of gardening practices everywhere.

Steve and his wife Peggy reside in Hockessin Delaware.